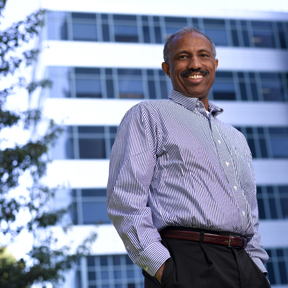 Department of Mathematics and Statistics

I was born in Ahoskie, North Carolina in 1951 where my father was a sharecropper. We moved to Newport News, Virginia, when I was 2 years old, where my father took a better paying job in the Newport News Shipyard. We lived in segregated housing and I went to segregated schools in Newport News. Every Sunday evening, my father took us to a drive-in theatre. There was a fence in the middle separating colored (as we were called then) from white. Many other things were segregated also. We moved to Hampton, Virginia in 1963 and I went to all- black schools for 2 years in Hampton through the eight grade. The City of Hampton then introduced a program where students could attend any school in the city. With a friend, we decided to attend an all-white school in the 9th grade. I graduated from the city’s white high school with a few other blacks. I went to college at Hampton Institute in my hometown, an Historically Black College. I started out as a math major, but struggled a little, and finished in economics. After graduating, I took a job, as a civilian, working for the army for 5 years. While working, I took evening classes at Virginia Commonwealth University in Richmond, Virginia. I took Math, Physics, Astronomy etc. I loved that math so much that I quit my job and went back to school full time in a graduate program in math at the University of Cincinnati. I did very well and received my MS in mathematics from Cincinnati in 1981. I was encouraged by a professor at Cincinnati to pursue a PhD in mathematics at UC Berkeley. I applied, was accepted, and began my graduate work there in 1981. I finished Berkeley in 1987 and took a tenure track job at the University of Massachusetts at Amherst in 1987. I have been promoted from Assistant Professor to Associate Professor to Full Professor. In January 2018 I became the Department Head.

In elementary school in Newport News, math was more about computational skills and speed. With respect to this, I was an average student. In Newport News, the students at Newsome Park Elementary School joined students from many elementary schools to go to Carver High School in the seventh grade. The teacher at Carver taught more abstract concepts. On the first exam, I made the highest score. At these schools, the teacher announced to the class who had the highest score. I was so proud. This happened several times in secondary schools in Hampton. This gave me some confidence. At Hampton Institute, math was harder and I did not consistently put in sufficient effort, so I eventually changed my major to economics, mainly to graduate. Afterwards, I believed and wanted to prove that I could be successful in math. I took evening classes and worked really hard in them. One problem at Hampton was that my main calculus professor had a strong accent and I got little out of the lectures. Beginning at Virginia Commonwealth University, I read the books. I found that I learned much more by doing that. I think that this was important in helping me be successful in math.

I am proud to have published in research journals, over 40 papers. I am proud to have mentored and made an impact in students lives. One student that I advised starting when she was a freshmen has a permanent position at Oxford in math biology. I supervised the thesis of the first African-American to receive a PhD in mathematics at the University of Massachusetts. I was part of a 9 year program called AIMS, which involved teaching accelerated math to African-American students in the Amherst school system. Most of these students went on to top universities and did very well. A major accomplishment is being the Head of a Math & Stat department at a major research university.

I have been happily married to a fabulous woman for 38 years. I learned from my family to give back for example through AIMS, being a Big Brother etc. With a colleague we are teaching a math course to inmates at the local prison.

I have had a great and long career and I was thinking about retiring before the possibility of being Head became a possibility. The Head of the department is a job that a lot of people avoid, calling it a “thankless job”, and UMass has a huge department. However, I thought about my mother and father with 6th and 9th grade educations, respectively, who worked really hard so that their kids could have opportunities better than they had. This was for them. Another one of my hobbies is genealogy. I have built an extensive family tree. Of course, I ran into barriers because of slavery. The genealogy has caused me to think about all of my ancestors before my parents who had even less opportunities. This was for them too!! Words that I say to myself frequently and keep me moving forward, by Maya Angelou, are “I am the hope and dream of the slave”. I had to take the job!