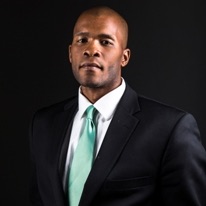 I am currently a Senior Lead Data Scientist at Booz Allen Hamilton where my work focuses on helping clients gain actionable insights from large data sets. This generally focuses on the analysis and the development of analytics using a number of mathematical techniques and presenting these discoveries to clients.

The story of how I got into mathematics is centered around my love to ask questions. I went to public school in DC most of my childhood and it was often difficult for me to accept things as true without asking “why”. There were several questions, particularly in mathematics, that went unanswered until I began at Morehouse College. There, I began asking the same questions, but instead of being told to accept it as true, or sent to the office, I was asked to return during office hours and introduced to the concept of a mathematical proof. It was such a beautiful and powerful thing that I almost immediately added mathematics as a major.

The proudest moment of my mathematical life is centered around receiving my PhD. I knew early in my college career that I wanted to pursue a career in mathematical research. This PhD provides me with the introduction and background to the different aspects of what it takes to conduct proper research, draw informative conclusions, and present these results to the proper audiences. Outside of the mathematical world, my happiest moment has been meeting and marrying my loving and wonderful wife and the family that we are building together.

As far as words of wisdom, they would center around persistence. Nothing in the world can take the place of persistence. There is a proverb that says that rivers cut through rock not through power but through persistence. If you combine that with the humility and ability to admit the possibility of errors in your ways and it can take you very far, both in mathematics and in the real world.