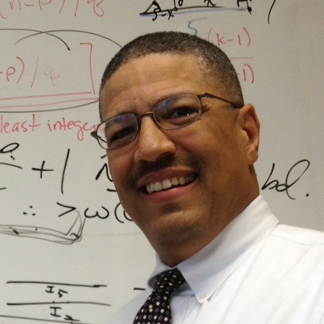 Associate Professor and Chair of Mathematics

I was raised in Atlanta, growing here through elementary school, high school, college and a master’s degree here. I was away for awhile–California for graduate school, Maryland for first job–then returned to Georgia when Morehouse hired me in 2002. These days I also fancy myself a Germanopratin!

Discover? I can’t say. For as long as I can remember, I’ve had passion for mathematics; I have heard enough stories from other people over the years to know that I was fortunate never to have that passion snuffed out. I had parents and a family that supported and lauded my interest in mathematics. I also thank teachers at every level who saw in me desire and talent for mathematics and in turn did all they could to support me and push me forward.

As for cultivating my interest, one particular story does come to mind. I had a high-school math project, The Fabulous Fourth Dimension, that gained me quite a bit of notoriety. It was a really good project and a wonderful exploration–reading Flatland and other works, crafting accurate three-dimensional models depicting projections of four-dimensional polytopes, explaining it coherently. The project caught the attention of teachers and professors, but it also became a source of discussion and some laughs in social situations–“Coop! Tell us about the fourth dimension!”–and there I would go, sketching on a surface or making gestures on a floor, describing connections between two- and three-dimensional spaces and how, analogously, we could conceive and understand relationships between three and four dimensions.

For another memory of how my mathematical interests were cultivated even earlier as a young boy, I refer readers to page 24 of Erica Walker’s Beyond Banneker. There, under a pseudonym, I describe my converging-to-the-edge- of-the-porch story, a lesson from my grandfather. (Maybe this tease will lend a fresh spike to Dr. Walker’s book sales!)

I am proud of my contributions to the development of students I have taught over the years. Of course, this includes those who have done the biggest things–I beamed like a proud father during former students’ presentations at the recent Joint Mathematics Meetings! But I also find great pleasure in class or office when I see that glint in a student’s eye, catch that smile of satisfaction, or hear that glorious “oh-h-hh!” when understanding registers.

I am proud that I have, on numerous occasions over many years now, uplifted students and inspired them to work hard in a course, to take another course, to declare a mathematics major, or to proceed to advanced study, when so many other professors so many other places would have left them discarded, defeated, and feeling dumb. I am proud of my ability at times to empathize, to reach students where they are, to help them “get it”, and to help them know they are smart, when they may not have realized that before.

I am proud of my accomplished family and my illustrious wife Angie. But those aren’t accomplishments, just circumstances of birth and a good choice.

I try to treat people decently, succeeding often, I believe, though not always. I hope I have lived a life in which others who know me, who have encountered me, say: “That Duane Cooper, bless his heart, he’s ‘good people’.” To me that’s high praise– epitaph worthy!–and would make me proud.

To students, I share this slogan: “Mathematics: There’s too much to memorize!” Strive to know not just what to do when but why it works.

To people trying to make a difference: “Do what you can where you can.” I’ve felt this way for a while, and when I shared the sentiment as a panelist a couple of years back, I could tell it really resonated with numerous people who approached me afterwards. Bless those who are committed to institutional and systemic change–really! it’s great if we can achieve it–but the magnitude of our problems as Black folks in general and in mathematics in particular can be dispiriting. I think people should feel good about whatever they can accomplish in whatever their spheres of influence are.

To all: Be ever mindful that the little things we say can make big differences, and you may never know that your words–or which ones–mattered. My favorite story of this type goes something like this: Back when I was on faculty at Maryland, a high-achieving Black engineering student, 3-point-something grade point average, revealed in an interview that, at least in part, he traced his success to when his calculus professor, Dr. Cooper, told him he was good in math; no one had ever told him this before. I actually remember, vaguely, the interaction. I taught him in Calculus 1; he struggled, eventually earning a C in the course. I recall telling him one afternoon during office hours that he was talented but that when he moved on to Calculus 2, he should consider getting a tutor to help him strengthen his performance. I didn’t make up the opinion that he was good just to pump him up; I could see his ability, if raw. But I was just trying to give him advice to help him survive the next course. I would never have imagined he would internalize my opinion in such a way that it would help launch him to a successful, strong performance in his major. So my advice, wisdom I suppose, is to be generous and genuine in what you say to others; you just don’t know–and may never know– what it might mean to them.