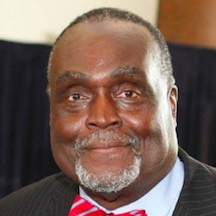 Dean of College of Arts and Sciences

As the University’s oldest and largest academic unit, the College of Arts and Sciences (COAS) has long committed itself to uphold the University’s mission as the flagship. Its dean, to that ends, is considered the “captain of the flagship.” On November 1, 1999, Dr. James A. Donaldson became dean of the College of Arts and Sciences.

Dean Donaldson joined the faculty at Howard for the first time in 1965, staying only one year before joining the faculty permanently in 1971 as a professor in the Department of Mathematics. He served as chairman of the department from 1972-90, played an integral role in the development of its Ph.D. program in mathematics—the first and only doctoral program at a Historically Black College and University (HBCU)—and oversaw the development of tenured faculty.

Dean Donaldson was a humble leader who made the welfare of students one of the primary concerns of his administration. He also made faculty development and alumni relations critical priorities throughout his tenure. Upon stepping down from his role as dean in 2013, students, faculty, staff and alumni participated in honoring him—evidence of his support and influence. He was a freedom fighter, in the tradition of many luminaries who also walked the walls of Alain Locke Hall, he navigated the tough terrains of the academe to secure the way for the next generation of trailblazers, academicians and leaders.

There were many initiatives introduced through COAS and completed during Dean Donaldson’s tenure, including the publication of the seven-volume report on the New York African Burial Ground project; the development of more than 10 summer study abroad programs; the unanimously approved (by students) assessment of a Study Abroad fee to support international travel and global programming within the University; the re-imagining of the Freshman Seminar program; the launching and expansion of the Undergraduate Research Symposium; and, the presentation of highlighted activities of the college in The Flagship newsletter.

In the tradition of deans of COAS, Dean Donaldson returned to the classroom and his scholarly love of mathematics after his successful tenure as captain.

Dean Donaldson served on committees of several professional mathematics and science organizations. He was a member of the Council of the American Mathematical Society, served as the second vice president of the Mathematical Association of America, and was the editor of the National Association of Mathematicians Newsletter. Dean Donaldson’s research interests included the history of mathematics and mathematics accessibility issues, and he published more than 50 research papers, articles, and presentations in these areas as well.

We salute his service to the University as a professor, chairman, dean, scholar and friend.

Please join me in consoling and lifting in prayer his family and every life he impacted throughout his tenure at Howard.

Excellence in Truth and Service,