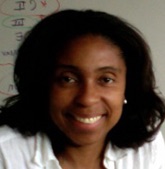 I was born in Massachusetts while my father was in graduate school, grew up in Birmingham, AL and went to Spelman College. After receiving my PhD from Emory University I did two postdocs before joining the faculty at Morehouse College.

At some point during college, with lots of influence from faculty, I decided to go to graduate school to get a PhD in Mathematics. This probably happened after my first summer research experience, and getting feedback from faculty that I was capable of being a mathematician.

My thesis was in algebra, specifically non-commutative rings. I’ve never been particularly interested in the applications of mathematics. I very much like the abstractness and the richness of the theory of pure mathematics. To some extent, algebra found me. When I was taking the first three semesters of algebra at Emory I got along well with the professor teaching the courses. I spent a lot of time in office hours and then ended up doing a reading course with him. Really, what happened was that I wanted to work with my Ph.D. advisor and it turned out the kind of math that he did was interesting, too.

On mentoring…
I think even today it has been really helpful for me to have mentors for all kinds of things… One thing I want to say about mentorship is that most of the people who I think of as mentors probably don’t know I think of them as mentors. I think people get a little worried about what that title means. All that it means is looking people in the eye, answering their questions, letting them know when they are messing up, and giving them a path to get back on course.